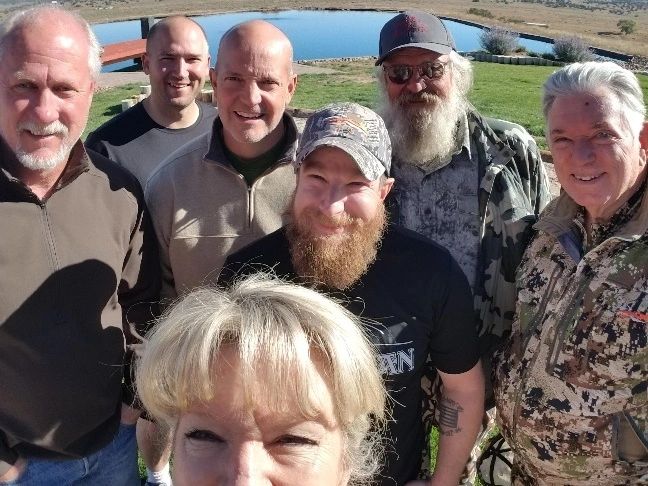 It all started at the January 2018 SCI Las Vegas Chapter Annual Banquet. John Reich was the successful bidder on an Elk hunt that would make a dream come true for Army Sergeant Trevor Phillips. On October 1st, the opening day of the elk hunt, John set out with a goal to finally get a trophy class bull and Trevor his first bull elk. This hunt would have its challenges with Trevor, normally right handed but he would be shooting left handed since he lost most of his right arm to an IED while on patrol in Iraq. John is a well-seasoned hunter with many successful hunts all over the world and being in pretty good shape for 79, but there were still limitations.

John, a North Carolina native, started hunting when he was 12 years old with a bolt action .410. His first trophy was a cotton tail rabbit and he was hooked for life. A Life Member of SCI, he has hunted Africa, Argentina, Mexico, Canada, Alaska, and most of the United States. He moved to Las Vegas in 1967 working for Shetakis Wholesalers, Summa Corp., and Macayo Vegas before Starting his own company, Kitchenland Inc in 1977. I hadn’t known John until this hunt introduced us, but I quickly learned he is a genuine individual and dedicated hunter. His donation made this possible, his good heart and philanthropy are well recognized in the Valley.

Formed in 1990 by two Vietnam Veterans, Freedom Alliance is an established organization helping military families overcome the wounds of war. Their vision statement, a national security strategy which deters wars that are avoidable; wins wars that are inevitable; and never forgets those who go to war on our nation’s behalf.

Shortly after Freedom Alliance was formed, the United States declared war on Iraq and the founder’s mission was clear: Freedom Alliance determined that Persian Gulf warriors would receive the respect and support their Vietnam-era predecessors were denied a generation before.

The Las Vegas Chapter relied on Freedom Alliance to select the soldiers for this hunt based on their 27 years of experience in identifying and helping veteran warriors. Army Sergeant Trevor Phillips, a resident of Washington State, grew up hunting and fishing and has continued his passion for the outdoors even with the curve balls life has thrown his way. As a child Trevor was diagnosed with childhood leukemia, yet miraculously he survived and now in his early thirties he is still cancer free.

Trevor was deployed in 2003 and 2004 to Mosul Iraq where while on patrol his tank hit an IED and sadly he lost part of his right arm. His active duty spanned over eight years and was sent to Kansas, Washington, Korea, Bosnia, and Iraq. He was assigned to ACO 3-2 Stryker Brigade, a tank Battalion. Their main objective was to destroy weapon caches and IED’s. Their tank survived many IED blasts and many casualties were had before one finally injured Sergeant Phillips. He is an avid and accomplished archer and Bow hunter. He has fashioned a custom release that he straps to the remaining portion of his right arm allowing him to pull the bow back and shoot with amazing accuracy.

We had five days to get Trevor his first bull and John his biggest, a tall order for such a short hunt. We had plenty of help; Ryan Dennett, SCI local Chapter President, and Ryan Behm a veteran himself from Freedom Alliance were along to make it all happen with Karrie Bennallack making sure no one was ever hungry. Bob and Sherri Wellborn were gracious in providing the Land owner permits for their ranch to make this possible. This year was a banner year for bulls in the area with opportunities every day. A tripod was carried along to give Trevor a stable shooting platform, but the steep and loose hillsides made any shot difficult. A clean miss on a nice bull the first evening helped get the jitters out of the way.

John and I found a bull early in the evening it wasn’t quite the size John was hoping for, so a call was made to Trevor and his crew which were about fifteen miles away and a good mile hike in. They made it over surprisingly fast, which led to some confusion and the shot was luckily a clean miss. John and I caught up with them and found Trevor hands on his knees still trying to catch his breath from the run up the hill. Ryan was nicknamed “the goat” after that and lived up to the name the rest of the hunt…which was the only complaint Trevor had the whole trip, Ryan loved it.

John and I were out early every morning until after dark each night with opportunities on bulls almost every hunt. John had his mind made up on only harvesting a big bull. Many of the bulls encountered we glassed long and hard trying to grow their horns but John in the end would pass and we would just enjoy the show each would provide, bugling and chasing cows.

The third morning out we had a nice lite drizzle of rain making the stalk very quiet. We were on a group of elk with a bull screaming nonstop. I thought for sure he would be the one, after two and half miles and three hours in and out of the trees trailing them, finally we caught sight. There were five bulls each one got bigger but, in the end, John held fast, and we walked back with only a great encounter and another story to tell.

Rattle Snake ridge once again proved to be the place to be. The afternoon of the fourth day, the same daily conversation took place before the prime hunting time, “Where do we go now?” It was unanimous back to Rattle Snake Ridge for Trevor; by then they had seen twelve bulls from there.

Several of these had been shooters and the confidence high. With not a lot of light left a nice five by five was working his way off the opposite ridge and Trevor on an extremely steep side hill a solid rest was hard to obtain. The first shot was a hit but a little back, but the final bullet hit its mark and Trevor had filled his quest for a bull elk. With each encounter, Trevor was excited for hours after, sometimes his hand still shaking, this night was no different. It was amazing to be a part of his experience a true warrior and hunter, humble and thankful for the opportunity.

Now it was the last day to get John his bull, the morning started out as the rest dark and chilly with the bulls bugling. This was always a blessing giving us a direction to hunt and intermittent reminders we were on the right track. With three bulls screaming, we were confident one had to meet Johns standard. Three hours later at forty yards another five by five bull, John moved several times trying to make him bigger, then back to the house for the final plan. It was decided the final evening hunt would be where a monster bull had last been seen the week before.

Sadly, the sun set on us with only a distant bugle and a few females grazing in the distance. A true hunter and sportsman, John turned to me and said this was a great hunt as good as it could get without a big Bull on the ground. John hunted hard every time out and we averaged close to five miles each hunt, I can only hope at 79 I am able to cover the ground like he does.

This was a great experience for all who participated Trevor was able to harvest a Bull and fulfill a dream. John had another chance to continue hunting, his passion, and experiencing a breathtaking setting with wildlife all around. A successful hunt doesn’t always mean an animal has to be harvested, it’s the experience and the time spent with good people. We were all very grateful and proud to be able to spend time with a Veteran who has given so much for us especially one as humble as Trevor. Thanks to our Chapter members and supporters such as SITKA Gear and men like John Reich we can give back to our Soldiers who have put it all on the line for us and get so little support and recognition for the sacrifices when they return home. As you can see many things can be accomplished through hunting and by hunters coming together for a cause.